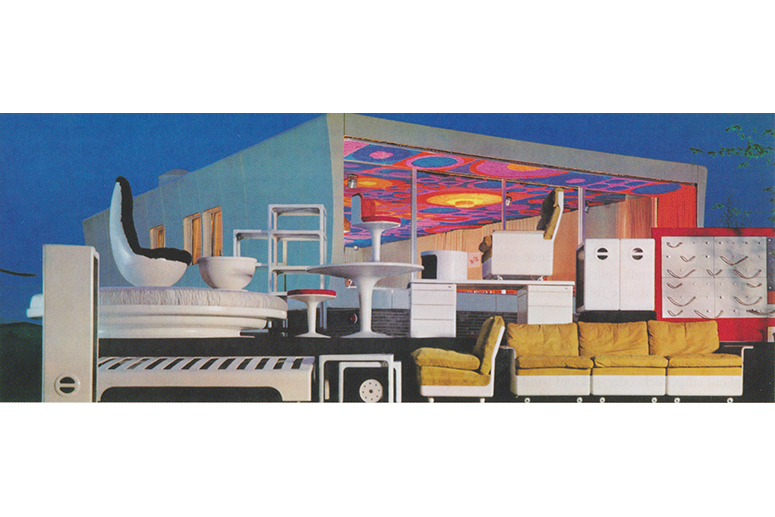 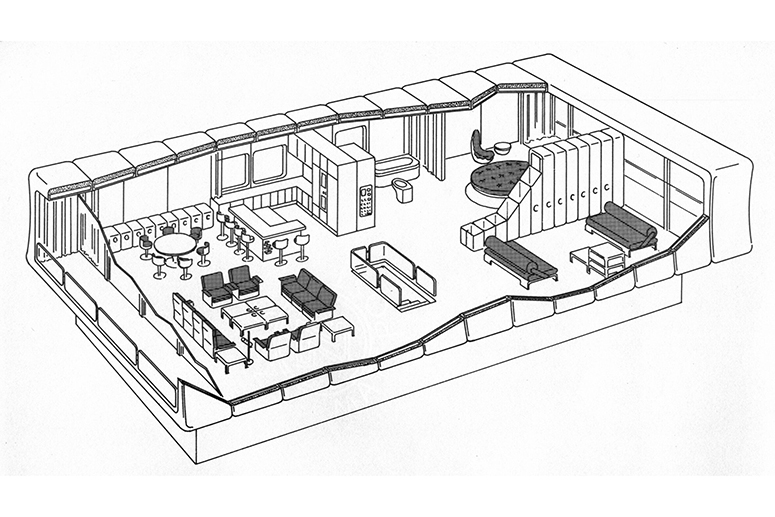 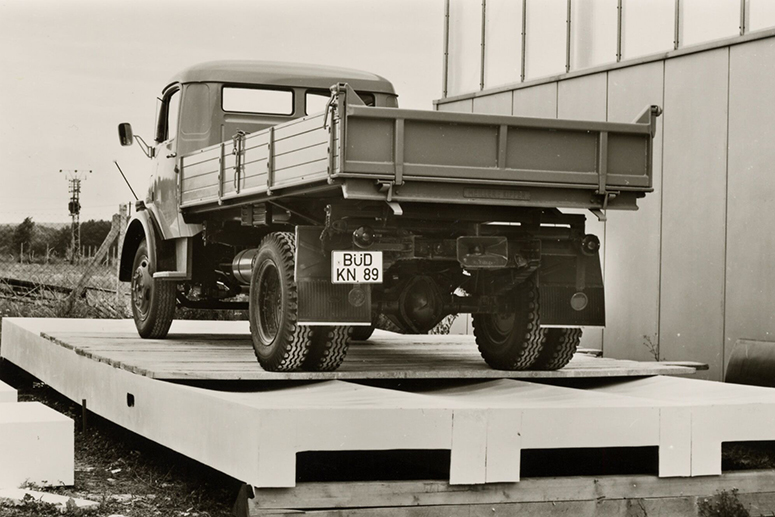 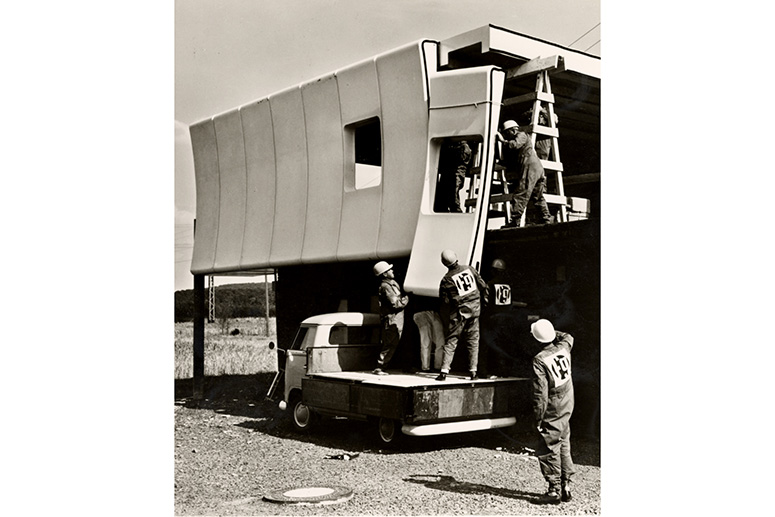 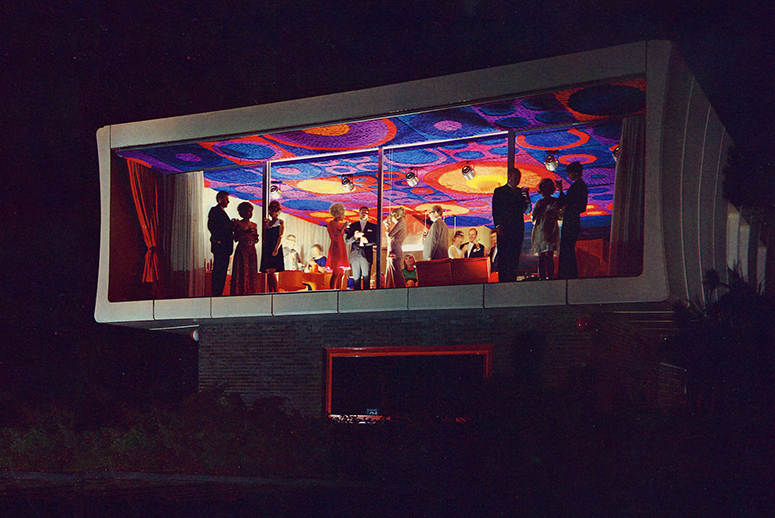 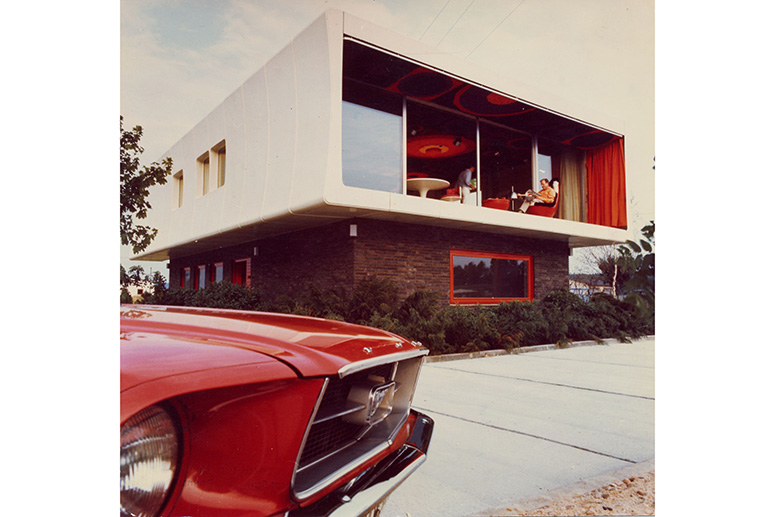 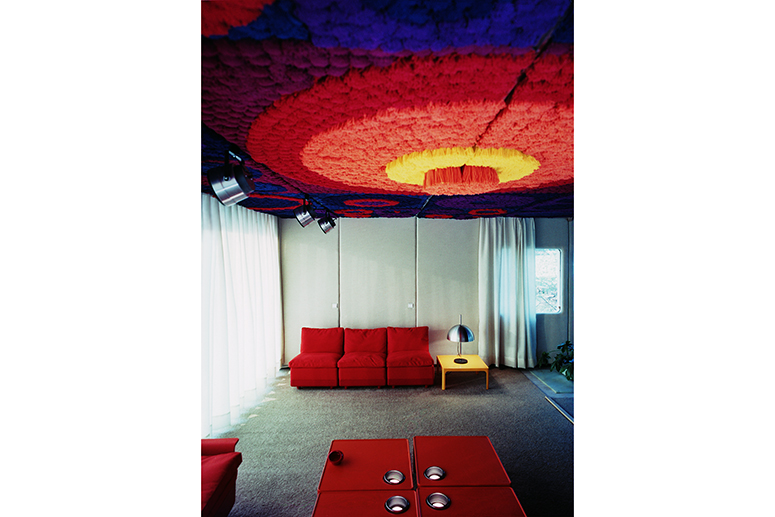 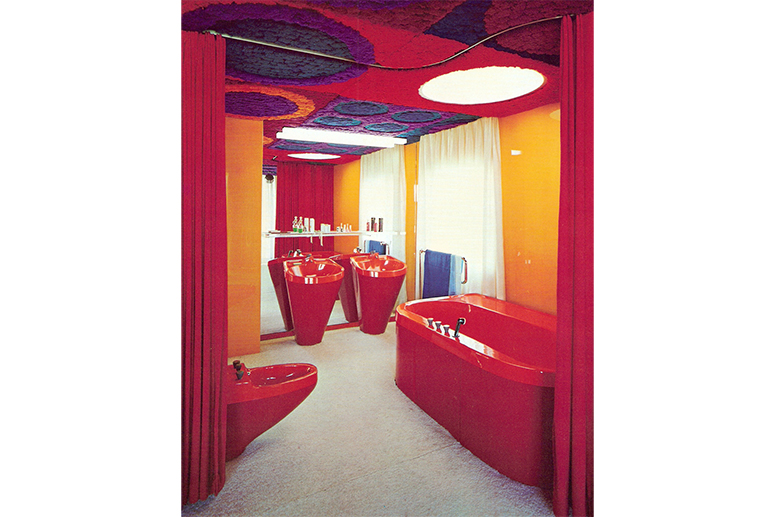 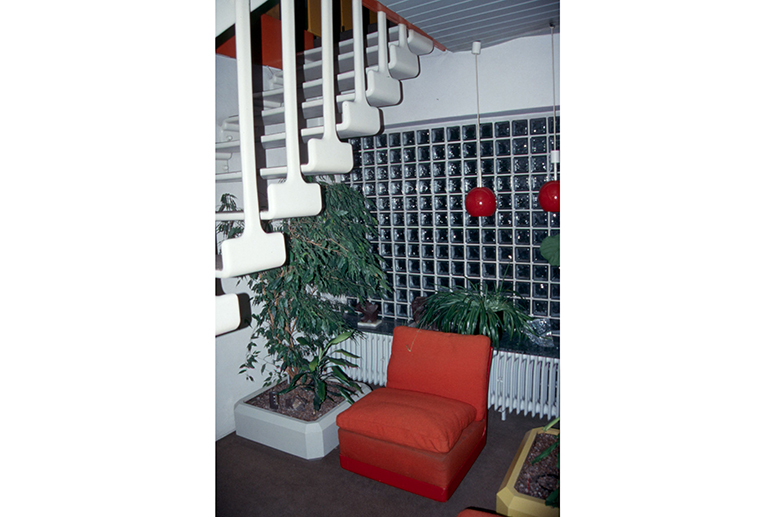 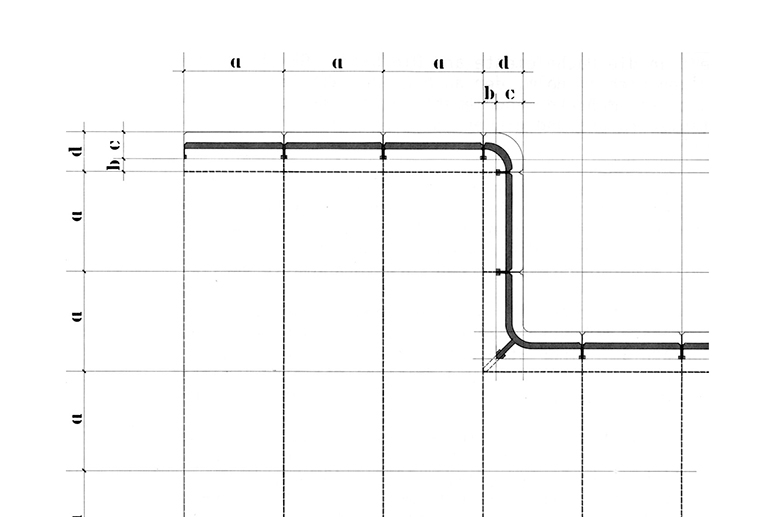 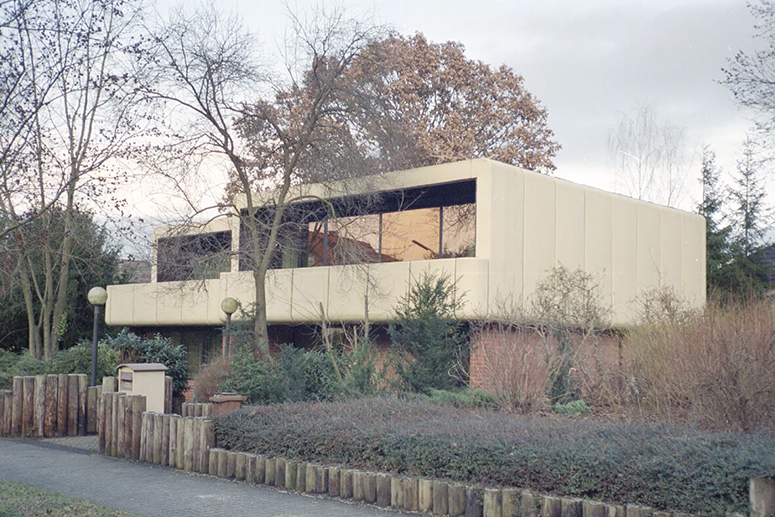 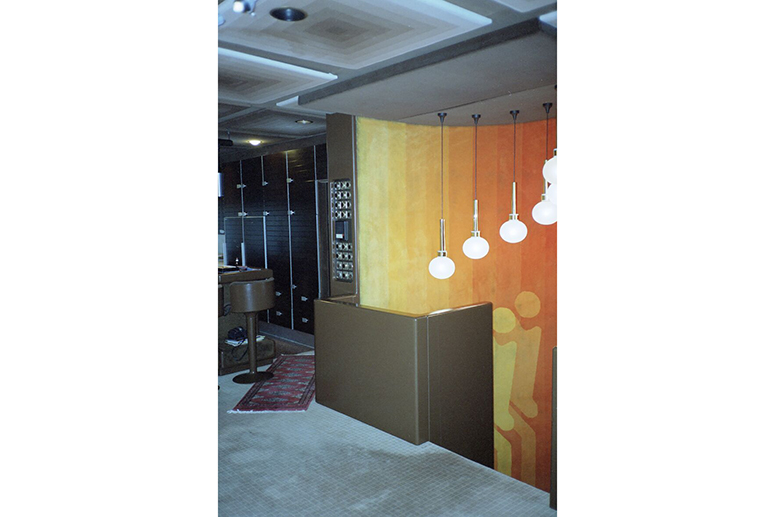 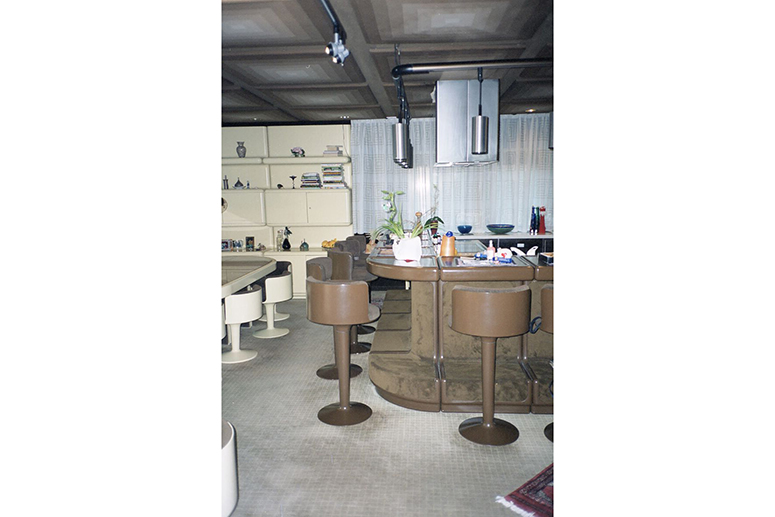 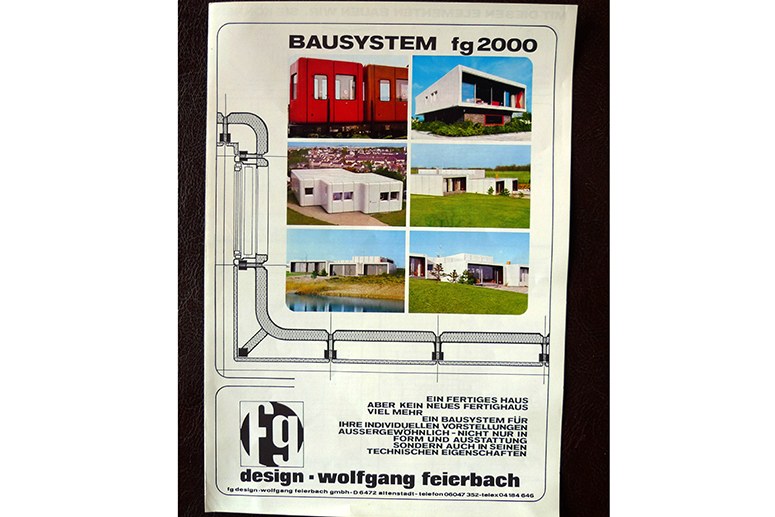 The fg 2000 buildings developed as a prefabricated system by Wolfgang Feierbach are high quality single-family houses from the 1960s / 70s with the typical color and shape motifs of this architecture and design era. But above all, the fg 2000 are prime examples of the pioneering days of building with glass fiber reinforced plastics (1942 to 1980). The prototype was set up as a demonstration object in 1968-69 and then used as an office and residential building for the Feierbach family until 1979, after which it was used solely as an office building for his company fg design. The fg 2000, built in 1979 the became the residence of the Feierbach family.

Wolfgang Feierbach: "During the production of large furniture parts, I noticed the great stability provided by the combination material GRP (fiberglass) (glass fiber reinforced polyester resin), especially in terms of the load-bearing capacity of the bed frames, but also of other parts we manufacture. I wondered whether you could use it also build a house and what could that look like. There have already been attempts made in the USA and Finland. But these model houses were so futuristic in their shape, that they looked like spaceships from unrealistic films or they were doubly-curved roof structures like the Olympic stadium roof from the 1972 Olympics.

No design was really intended as dwellings. At first I had the same idea: A house made of one seamless piece of plastic. But then all houses would be the same. Nobody would like this uniformity, which is why I came up with a modular design consisting of stable, load-bearing wall elements and cantilevered roof elements with a high span width."

„After a few sleepless nights, the design in my head became apparent and work could begin. "(1963)

In 1968 the first house prototype of the fg 2000 in Altenstadt was erected from 13 roof and 26 wall elements. The entire system was assembled on a prepared masonry base with a concrete ceiling within a day without any kind of building permit, because, according to Wolfgang Feierbach: “Who should I have approached for something like that? Such a new structure could only be introduced the light of day as an experiment. Nobody had any experience and no authority had the knowledge and skills to be able to inquire about it.” But there was also pride involved in having achieved this unaided and then being able to invite everyone to a big opening ceremony.

Due to the presentation of this plastic house in the regional as well as international press and television, the fg 2000 achieved a high level of publicity. In 1968/69 the structure had around 200 visitors daily. In 1969 the Federal Ministry of Urban Development and Housing awarded a research assignment to further develop the building system in order to achieve even greater flexibility in use. This resulted in positive and negative corner elements, so that L-shaped, H-shaped and atrium houses could then also be erected. With very few different construction elements, residential houses, office buildings, holiday homes and structures could be built for various purposes. It was not intended to be a typical type of house, since Feierbach wanted to offer various elements from which the architect could then assemble his own house.

After examinations by the relevant federal testing institutes, the higher federal building authorities were able to issue general approval for the construction of the fg 2000 in October 1973. The amount of additional documentation required for the building permit procedures of the subsequent fg 2000 was significantly reduced because a type approval was available. Due to it assessing the construction in a summarized manner, the only other documents that had to be submitted for the building permit were those that were particularly important for the respective building and could not be specified in general.

By 1979 a total of 35 fg 2000 had been produced: the prototype, four residential houses in variants of the further developed building system and 30 smaller ones for commercial use at airports in Frankfurt, Berlin Tegel and at the VDE test centers among others.

There are those two buildings by Mr. Feierbach in Hessen and a residential and commercial building in Biblis. Another fg2000 residential building is located in Erkerode, Lower Saxony. Until 2008 there were two but the second one was professionally dismantled and then rebuilt in 2014 in Baden-Württemberg, see fg 2000 reconstruction.

By the end of the 1970s, the press interest had died down and with it the interest of potential buyers. At the same time, the high transport costs to more remote areas made it impossible to offer consistent prices. According to Mr. Feierbach, opening further manufacturing branches would not have been economically viable however.